A journey from slave to master.

As a Jewish slave laborer under the Nazis on the Russian Front, he impersonates the German commander, ordering: “Retreat!” to the German soldiers, reversing the tide of a major battle toward a crushing Nazi defeat while saving the lives of countless Jewish slaves to whom Aaron exhorts to follow their fleeing masters into the woods…he later escapes from the slave labor camp and joins the Russian Army, for whom he captures and interrogates hundreds of Nazi officers and spies, obtaining valuable intelligence; helping the Soviets oust the Nazi invaders from Russia. The Russians then reward him by making him ruler of a conquered Nazi town with unlimited power to exact revenge against his mortal enemies. But then the Russians arrest him and prepare to kill him on suspicion of being a Nazi spy. Escaping from the Russians and running for his life as a fugitive with a huge price on his head, Aaron manages once again to outwit his pursuers. After the war, he becomes a wealthy black marketeer, and even marries his hometown sweetheart when they find each other by chance, hundreds of miles away from home, after each had thought the other had perished.

Meet Aaron Herskowitz: 5’2” inches tall, thief, horse master, assassin, smuggler, a Jewish slave who escaped from his captors and made history—but until now, wasn’t recorded in it. Aaron’s Revenge is the true adventure of a World War II hero you’ve never heard of. This gripping story, based on the recollections Aaron’s son Howard pried out of him late in his life, shows the power of one human being who refuses to let evil go unchallenged—even challenging the evil of revenge he found in his own heart.

Aaron Herskowitz tells his story to his son, Howard, who recorded video interviews with his father about his epic adventures, survival and revenge during World War II and his journey from slave to master… 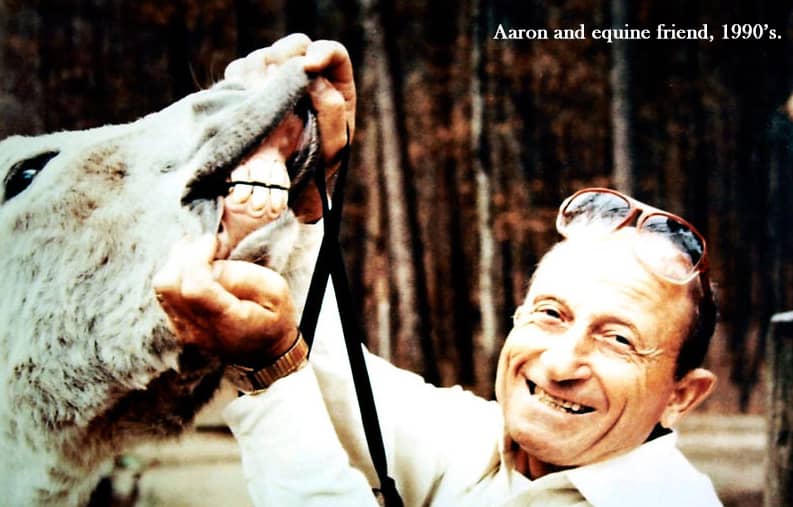 From the Czechoslovakian town of Bilky, across the then-Soviet Union and back again, Aaron’s journey begins in 1939, and traces the Nazi-Hungarian offensive and retreat from the Russians.

If you would like to have Howard Herskowitz appear at your next event, CALL 954-303-7821 or
e-mail: info@aaronsrevenge.com