Aaron’s Journey is both physical and emotional. He traverses hundreds of miles, from his home in Bilke, to the Russian battlefront in Voronezh, then all the way back on foot to Gerjen in Hungary. The journey required incredible physical stamina, as Aaron endured some of Earth’s harshest winters.

With the help of world-renowned historian Colonel David Glantz (ret.), the locations and facts that Aaron describes to his son, Howard, have been verified, and the battlefields and important junctures recreated with as much accuracy as possible. Colonel Glantz is considered by many to be the world’s leading historian regarding the conflict between Russia and Germany, as well as Hitler’s axis satellite partners during World War II, including fascist Hungary. Because Aaron is conscripted by force as a slave laborer under the Nazi-Hungarian army, writes Glantz in the Historian’s Commentary for Aaron’s Revenge, Aaron is dragooned by the Hungarians and Germans eastward in the wake of Hitler’s obsession, in a ceaseless and senseless Nazi crusade to conquer Russia. 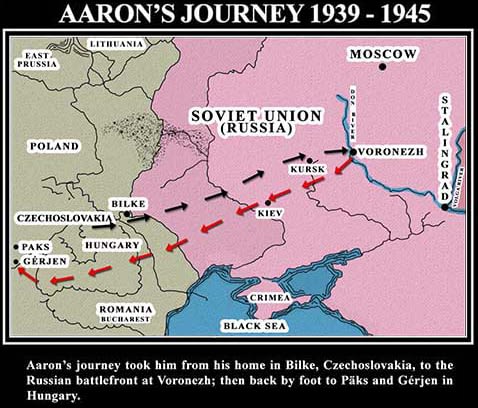 Aaron’s country was betrayed by her allies Britain and France at Munich in another failed bid to appease Hitler by ceding to the dictator Czechoslovakia’s impregnable Sudetenland on its western border with Germany. In early 1939, the Hungarian army swept into Bilke, Aaron’s hometown, along with Czechoslovakia’s eastern province, Trans-Carpathia. The wayward town, once part of the Austro-Hungarian Empire, would now be part of Hungary, a gift from Hitler. In return for this gift, Hungary pledged its army to Hitler in the event that he needed military assistance.

At first, many Bilke and Carpathian Jews were relieved that Hitler designated the Hungarians to be their new rulers; after all, the Czechs had fought side-by-side with the Hungarians during World War I. Unfortunately, the new Hungarian government is virtually as fascist and anti-Semitic as Nazi Germany. Hungary had thrown in its lot with their German senior partners in hopes of reclaiming territory lost during World War I, and they dragoon their Jewish men into slave labor. Hitler then seized the remainder of Czechoslovakia. 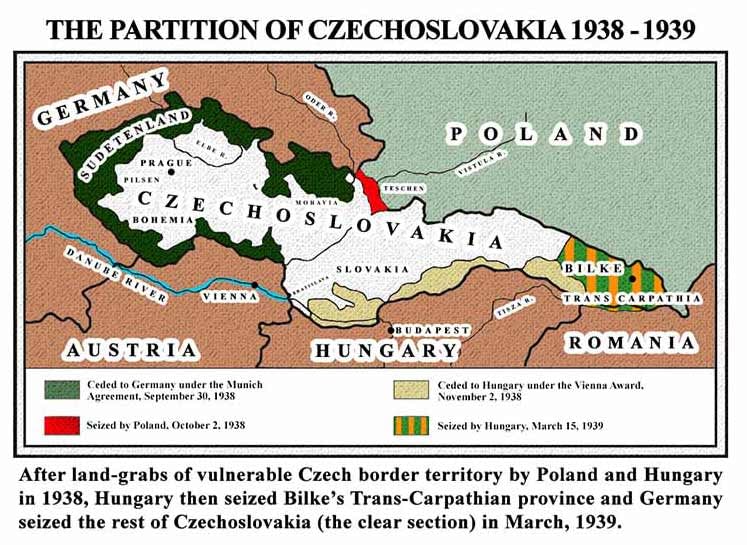 By the fall of 1942, the Nazis control most of Europe and North Africa (see maps to the right). After Germany enjoyed phenomenal success during their invasion of Russia in 1941, Hitler’s army encounters stiff Russian resistance in 1942, and he calls upon his Axis allies, including Hungary, for military reinforcements. By the end of October, Aaron and his fellow slaves board a cattle-car train in Hungary and head east into the Russian winter. The journey lasts almost two weeks.

Under the Hungarian troops, Aaron marches to the Russian front, the site of many epic battles, from which Aaron miraculously walks away alive. As a Jewish slave of the Hungarians and Nazis, Aaron looks for opportunities to escape to the Russian side. That too, proves perilous. Aaron’s facility with languages helps him to survive, enabling him to beg for food from villagers and to overhear the murderous plotting of his captors, allowing him to defend himself against his would-be assassins; he also draws on his experience from his Czech military training and the paramilitary training of Jiujitsu from Palestinian Zionists before the war to kill his mortal enemies.

As they approach the Russian front in late 1942, Aaron and his fellow Jewish slaves experience deadly airstrikes from Russian bombers, as both captors and slaves are decimated. Far to the southeast, Russian forces surround the German army in Stalingrad. With this blow to their strength, the Germans attempt to install a defensive line from Voronezh south to the Black Sea, while trying to rescue their doomed Stalingrad garrison. Aaron and his fellow slaves, having reached the battlefront just south of Voronezh, are forced by their masters to buttress the Axis front lines, as Hitler issues his usual suicide orders, “No retreat! Not one step backward!” This is to be the Axis response to a Russian attack, though rumors at the front lines indicate that Hitler actually intends to launch an offensive with his forces at Voronezh to rescue his Stalingrad garrison.

During the Russian breakthrough at Voronezh on January 13, 1943, Aaron and a few slaves hunker down in a trench as bullets tear at the snow and bombs fall from the sky. It is the Russians attacking with their most destructive firepower. During this brutal assault, the Axis commanders are strangely silent. Aaron, in a moment of spontaneous ingenuity, lifts his head above his trench, turns to face the Axis soldiers, and impersonates their commanding officers by bellowing the order: “Retreat!” both in German and Hungarian. A panicked rout of the Axis forces ensues along the entire Don River front, as Aaron exhorts countless Jewish slaves to follow their fleeing masters to safety in the woods, saving the lives of all; handing the Russians a major victory, and the Axis a humiliating defeat.