Young Aaron Herskowitz volunteers to join the Czechoslovakian army when he leaves the family farm in the small town of Bilky, Czechoslovakia. But when his country is betrayed by her British and French allies, he is enslaved under the invading and ruling fascist anti-Semitic Hungarian Army, now allied with Nazi Germany. At a tearful goodbye, he promises the love of his life, Helen, that he will return to her one day, as soon as the war is over. As the Nazis and Hungarians attempt to assault the Russian front in 1942, Aaron, unlike most of his fellow Jewish slaves, survives starvation, torture, typhus and assassination attempts on his life by his fiendish captors, thanks to his courage, military training and his uncanny ingenuity. Along and murders this torturous journey, Aaron confronts his God, hoping for answers to the brutality and inhumanity he and his fellow Jews are subject to, day after day. Aaron endures and witnesses the slaughter of Jewish Russian civilians and the Nazi rapes of Jewish women, together with the Nazis’ strange peculiar delight in throwing Jewish babies in the air and shooting them for “target practice.” With no answer from God forthcoming to Aaron’s pleas, he abandons religious faith and from that moment on, he believes only in himself. He denounces the orthodox rabbis, who not only refused to support his efforts to organize a Jewish military resistance movemenet, but who even preached against Jews escaping to Palestine (Israel), insisting that the Jewish people must wait and pray for the “Messiah” to descend from the heavens to lead them to the Promised Land. Instead, Aaron relies on his own personal resources and his new friend Ignatz Sax, a hulk of a Hungarian Jewish butcher. Despite his 5′2″ size, Aaron demonstrates astounding physical strength and will to survive, inspired by Helen’s image. Aaron and his friend Sax escape and become heroes for the Russian army, crossing back over enemy lines, capturing countless Axis spies and soldiers. Because Aaron can speak Russian, German and Hungarian, he becomes a master interrogator, harshly exacting valuable intelligence from his captives, helping the Soviet army oust the German and Hungarian invaders from Russia.

Then the unimaginable happens: The Russians appoint Aaron ruler of Gérjen, a conquered Nazi town, and the Russians give him unlimited authority, telling him, “After you interrogate your prisoners and send us the intelligence, just do with your captives whatever you want.” In this incredible reversal of fortune, Aaron realizes he has become master of his mortal enemies. He and his lieutenant Sax initiate a violent torrent of revenge, brutally interrogating their captives, executing those they deem the most criminal.

Soon Sax, upon learning that his wife and children were likely murdered at a Nazi death camp, loses all self-control and enacts a new wave of even greater savage brutal revenge against the German and Hungarian captives, ripping off their ears, tearing out their noses, smashing out their teeth. Sax exhorts Aaron to join him in his grotesque actions, impregnating the Hungarian women of the town with bastard Jewish childen, but Aaron is repulsed and refuses to participate, as he rediscovers his own humanity and recedes from his own brutality. Instead Aaron confronts Sax, reminding the big man that his monstrous behavior is no better than that of the Nazis. Enraged, Sax angrily threatens to kill Aaron. The ordeal tests Aaron’s capacity for friendship, and he breaks from his comrade, realizing that he must leave Gérjen, especially now that the Russians are backing Sax’s brutal actions.

Before Aaron has a chance to depart, he is taken to the headquarters of the Russian secret police. Aaron turns down the Soviet offer to be promoted to spy for Russia, to be parachuted into Germany to “kill some big Nazis.” Not realizing that the Russian “offer” is tantamount to a command, Aaron is arrested by the Russians and falsely accused of being a spy for the Nazis. He is beaten and jailed for weeks. Facing a death sentence, Aaron once again mounts a miraculous escape, running for his life from the pursuing Russians, who fire their guns at him while he dashes away to the safety of a forest. 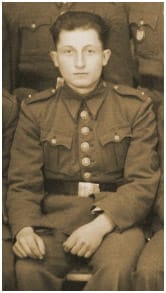 When Aaron returns to Czechoslovakia as the war ends, he finds his family’s home abandoned and Helen’s home torched. Hearing that they have all perished in the death camps, his heart is broken.

After making a fortune in the black market, Aaron learns that the Russians will soon turn Czechoslovakia into a communist regime. With a Soviet price still on his head, he begins his escape to Palestine. Along the way, in one of the most incredible coincidences of this amazing life, fate reunites him with Helen in a remote village. Helen has survived the Auschwitz and Bergen-Belsen death camps, and their unlikely reunion vaults them into their happiest, most prosperous days on Earth.

Several important skills saved Aaron’s life. One was his military training in the Czech army, and his Zionist paramilitary training in Jiujitsu before the war, allowing him to remove weapons from an enemy assassin and kill them with his bare hands. Another was his fluency in over ten languages, along with his expert horsemanship, a passion he maintained for the rest of his life. 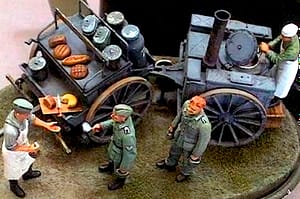 Aaron faces an impossible task: Pulling a heavy field kitchen, such as the one pictured here, out of a snowdrift. Ignatz Sax, a giant of a former Jewish butcher and now the camp cook, earns Aaron’s friendship helping him move the wagon.